Saturday June 26 thru Monday June 28, 2010
All three days of this weekend were extremely hot and very humid.  In the evenings, the weather was very unsettled, so no really good sunsets to share.  Saturday, was spent running the satellite antenna wire from the dish through the stainless rail and into the locker so it could be fed down into the main salon.  But before it could be fed into the locker, Bob had to climb into the locker to drill a hole through the fly bridge combing and into the stainless rail.  For awhile, it looked like he might have to stay in the locker as there wasn't much room to move! 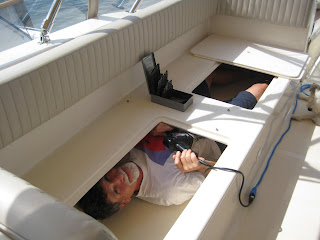 Fortunately, he was able to drill the hole and find a way to remove himself from the locker.
Sunday morning we continued with the installation, and finished it up before taking a break for the annual Brewers Yacht Yard picnic.  Each year the marina staff provides hamburgs, hotdots, chicken, beer, wine and soda.  All the boatowners bring their favorite dish to share and there is always a great selection of salads, sides and sweets to pick from.  This year, music was provided by Backwoods Zydeco.  A band that included an accordian, a squeeze box and washboard along with guitars.   Everyone had a great time eating and listening to the music. 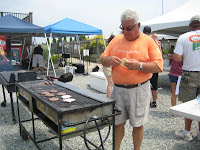 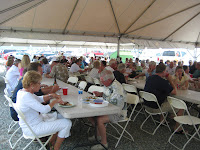 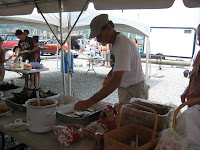 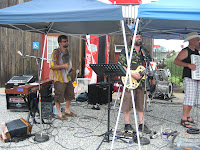 After the party ended, we went back to the boat to contact Direct TV and finish the satellite TV set-up.  After a number of phone calls, we had an account setup and were able to receive everything but our local channels.  Well, enough of that, we'll work on it in the morning! 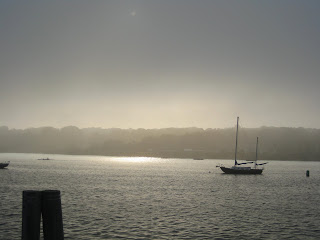 Because the fog rolled in around sunset, this was the best I could do!  If  you look close at the top middle of the picture, you can make out the sun.
The sun was out bright and early on Monday, and by 8 AM it must have been 80 degrees already.  After breakfast, Lynda made a call to KVH (the manufacturer of the satellite dish and receiver) for technical assistance.  This time they were able to determine the problem and we now have all the channels that we are supposed to get in the package we chose.  Bob did a fantastic job of locating a place to install the receiver, and then making it look so professional.  We should now be able to receive TV programming almost anywhere we travel to.  Below is a picture of the finished installation, it looks terrific.  The satellite receiver is almost hidden, you can see it just below the TV. 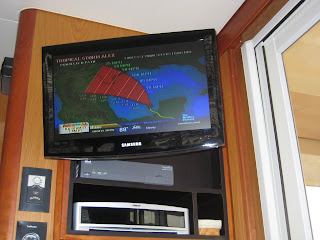 Below is tonight's sunset, now I guess we'll watch some TV and go to bed early since we need to get up early tomorrow, Lynda needs to go back to work.  See you on the weekend! 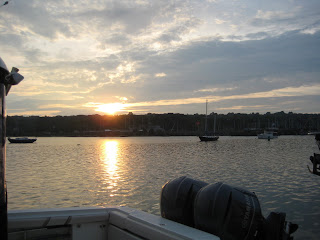 You Can Play, But You Need To Work Too!

Saturday June 19, 2010
Today will be a fun, relaxing day.  Even though we have projects planned, they will have to wait until later.  Friends, Ed and Marsha arrived late morning.  The weather was perfect, bright sunny sky and a light breeze.   So we headed out for a cruise around Fisher's Island Sound.  We had an enjoyable ride, Ed even took over the steering for a time!  We all decided it was time for lunch, and wanted to try out Lynda's birthday present, the new anchor!  We dropped anchor behind Ram Island which is just south of the mouth of the Mystic River.  The anchor performed great, and it set immediately.  We relaxed and enjoyed each other's company and then it was time to head back to the dock.  For dinner, we all went to Abbott's Lobster in the Rough, which is a popular, well-known restaurant right on the Mystic River.  After dinner, Ed and Marsha headed home and we went back to the boat. 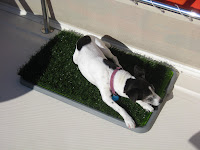 I had such grandios plans for the dogs to use the Potty Patch on board! 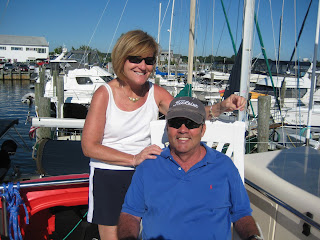 Ed and Marsha enjoying the day 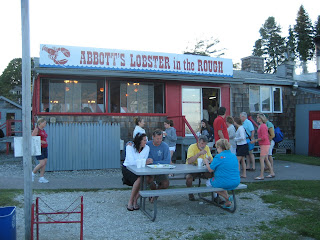 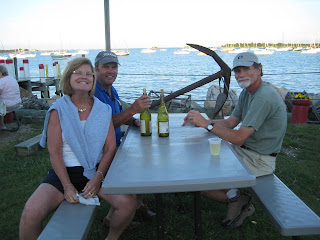 Dinner at Abbott's with Ed and Marsha

Sunday June 20, 2010
While tonight's dinner, spaghetti with meat sauce, cooked in the crock pot, Bob and Lynda tackled washing the boat to get the salt off from yesterdays voyage.  Later in the day we all (Bob & Lynda and the dogs, Tucker  Willow) went for a dinghy ride up the Mystic River.  It was really warm, so it was nice to be out in the dinghy to cool off.  Longtime friends, Jack and Carol came for dinner.  They have a Marine Trader trawler named "Irish Rover" that is also at our marina.  Jack will be retiring around the same time as Lynda next year and he and Carol plan to head south down the intercoastal and spend the winter in Florida.  Maybe we will meet up with them when we get to Florida on our Loop trip!  They came for dinner and enjoyed the spaghetti with meat sauce and a yummy chocolate "Earthquake Cake" Lynda had made for dessert. 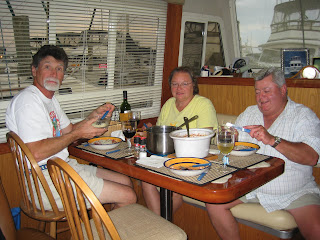 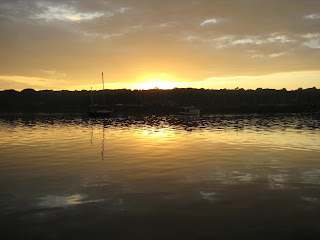 Sunset on the Mystic River

Monday June 21, 2010
If we are going to get our projects done, then we better get going today!  First, we needed to install a shelf in the cabinet for the crock pot.  Bob had to do some fancy woodworking to modify the pre-made shelf that we had purchased, but it is installed and is perfect!  We hope to use the crock pot on our Loop trip.  We'll start dinner in the morning and then after a long day of travel, a nice hot meal will be ready when we arrive.
Now it is time to tackle the TV satellite dish installation.  This dish differs from a home dish in that a home dish is stationery.  The dish for the boat has a mechanism that locks onto the signal and stays locked on the signal while the boat is under way.  You can even watch TV while the boat is moving.  Of course, you need to pay attention to the water and the course, but guests could watch the TV while under way!  So far, so good, we were able to mount the dish on the dinghy davit crossbar without too much trouble.  The next step will be to run the antennae wire and install the receiver inside the boat.  That will be a project for another weekend because we have worked hard and long enough on this beautiful first day of the summer.  Usually we pack up and head home late afternoon on Monday, but it had been such a beautiful day we did not want it to end, so we decided to stay the night and leave early in the morning so Lynda can go to work and Bob can play golf??!!  Something doesn't seem right with this scenario.  Oh well, only 356 more days for Lynda to work, but whose counting!!! 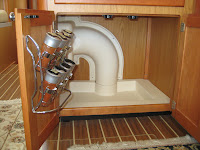 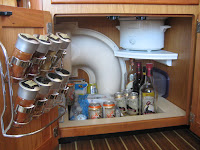 BEFORE & AFTER the shelf       installation 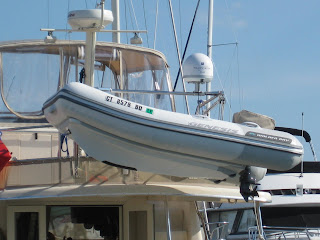 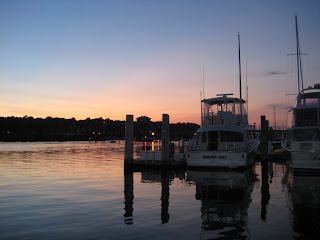 Tuesday June 22, 2010
The alarm went off early, 5 AM, but it was worth getting up so early when we were treated to this most glorious sunrise!!  Well, now it's off to work until Friday, when I can return to the boat. 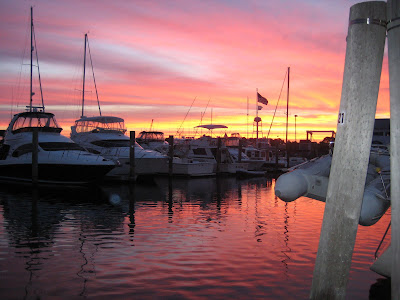 SO-SO WEATHER AND A BIRTHDAY


June 12 - 14, 2010
All weekend, the weather couldn't make up it's mind.  Each day it would start out overcast, then brighten and then the sun would break through, then overcast and a few sprinkles.  Afterall, this is New England, if you don't like the weather, wait a minute!!

Saturday, June 12th, Lynda's mom and sister, Nancy, came for a visit.  Lynda prepared homemade sticky buns that were enjoyed by all.  Since the weather was dry and no wind, we decided to go out for a short cruise down the Mystic River and into Fisher's Island Sound.  Soon, the rain began and we headed back to the dock.  No sunset photos tonight! 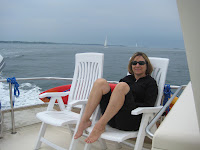 
Sunday, June 13th, Bob started working on making a shelf in the storage cabinet in the guest stateroom.  We'll finish it tomorrow, so we just hung out the rest of the day.


Monday, June 14th, we finished working on the shelf in the cabinet.  take a look, it came out great! 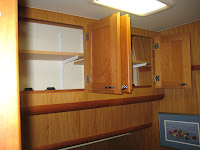 Today is Lynda's birthday and with a birthday comes a gift!  Bob, being the thoughtful, practical guy
that he is, and always with boat safety in mind, gave Lynda her gift ---- 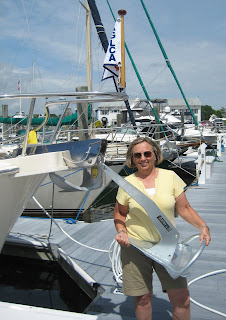 A brand new Rocna anchor!  This type of anchor is supposed to set quickly and hold extremely well, even in bad conditions.  Now we will be able to sleep more soundly when anchored out.  Time will tell!
Lynda Bob & Lynda at 9:59 PM No comments:

Saturday, June 5, 2010 The weather predictions for this weekend aren't the best, but we will head out to the boat anyway.  Even if he weather is bad, there is still something about being "on the boat"!  Sometime before dawn, Saturday morning we were awoke by thunder and some rain, but by the time we got up, the rain had stopped and the day turned out warm and sunny.  Early afternoon we took the boat out for a few hours and then back to the dock for another project.

Earlier in the week, Bob had removed the VHF radio that had been installed on the fly bridge, and replaced it with a new Standard Horizon GX 2100 which receives AIS signals.  This radio will allow us to identify commercial vessels (tugs, barges, tows etc.) and then be able to contact them easily if necessary.  The radio that he removed from the fly bridge would then be installed at the inside steering station.  But first, we had to snake another wire.  I don't know if you have had experience with this project, but it can be very frustrating to get the wire to go a seemingly short distance.  Finally, after a number of tries, we were able to get the wire from the fly bridge to the inside steering station.  Time for a celebration cocktail!  A little while later, our dock neighbors asked if we wanted to go for their "shake down" cruise, and so we went out for a late afternoon cruise on Long Island Sound. 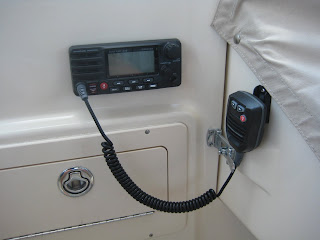 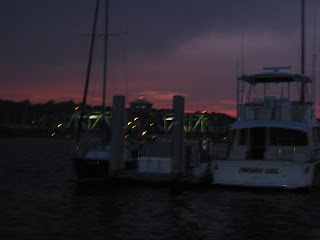 Sunday June 6, 2010
Again, the weather for the following day, Sunday, was not predicted to be good, but again, the weatherman was wrong!  For most of the day, the sun shone and it was a beautiful day.  Today, the project was to install the radio that was previously in the fly bridge, to the inside steering station.  Installation went smoothly and with any major issues.  Later in the day severe weather was predicted for the area, but all we experienced was a few strong wind gusts of 29 nph and some light rain.  By 7 pm the bad weather had passed and we had another wonderful sunset. 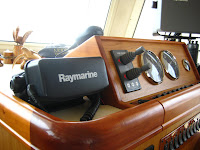 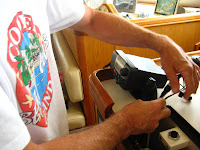 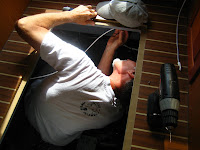 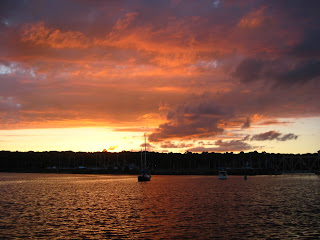 Monday, June 7, 2010
The morning was bright and sunny, although much cooler than the past couple of days.  After a leisurely breakfast, Bob began the task of finding a "home" for the engine maintenance box in the bilge.  Below is a picture of his success!  And now it's time to go home and back to work tomorrow. 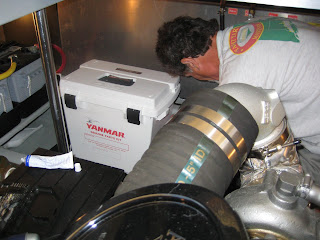