Since June 14th we have been busy and on the go!  The 14th was Lynda's birthday, so of course, there was a birthday celebration.  We went out to dinner at Anthony J's in downtown Mystic and enjoyed an excellent meal along with being able to see downtown decorated for Flag Day.

The following day, we headed up to a vintage car show in New Britain with friends, Vinny and Diana.  This was one of the larger outdoor vintage car shows we have seen, some of the cars were amazing! 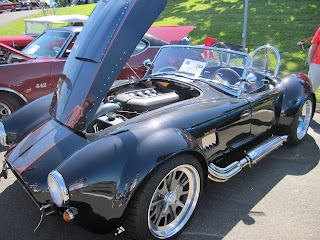 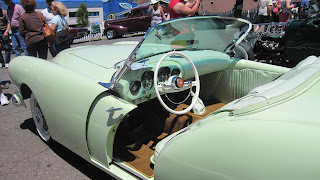 We were excited to get back to Mystic since we had received a call from friends we had traveled with on the Great Loop, Jill and Glen Moore on Last Dance.  They are from St. Augustine, FL and were currently docked in Mystic for a short visit!  We visited with them at their boat and decided to travel with them for a few days as they made their way to Maine!

So on Monday, we were up bright and early and underway at 7 am.  Well, early for us, since we usually don't get up until almost 9!!

We followed them for awhile (as we had done for approximately 1,000 miles on the Loop) 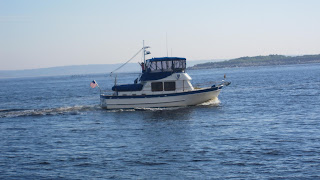 and then led the remainder of the way on to Cuttyhunk Island, Massachusetts, where we each grabbed a mooring.  We both launched our dinghys and landed them on the island.  This island has 16 full-time residents, two of which are children.  During the summer, however, the population is much more.

On Tuesday, we left Cuttyhunk

and moved on to Oak Bluffs, Martha's Vineyard, Massachusetts, and again picked up moorings.  It is one of the island's principal points of arrival for summer tourists, and is noted for its "gingerbread cottages" and other well-preserved late-nineteenth-century buildings. 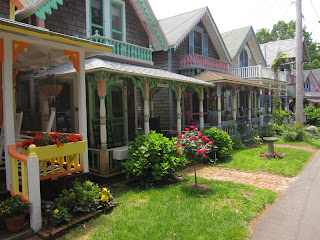 On Wednesday, we used the island bus system to travel to the different towns on the Vineyard.  For $7.00 per person ($3.50 for over 65) you can travel all day on the bus, getting off and on as often as you'd like.  Using this bus, we stopped in Edgartown, Aquinnah (formerly known as Gay Head), Vineyard Haven and back to Oak Bluffs. 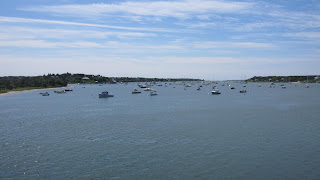 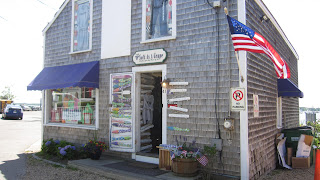 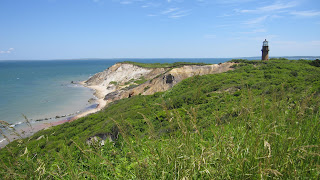 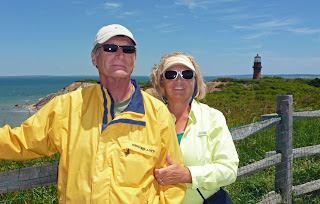 Thursday morning we left Oak Bluffs, went through Woods Hole and went into Quisset Harbor for a brief stop to wait for the tide to turn.  Around noon, we left Quisset Harbor and headed to our final destination for the day, Onset Harbor.   Fortunately for us, two of the three town moorings were available so we didn't have to anchor.  Glen had been in touch with another Looper friend, Joe Appicella, who lives on Cape Cod.  Joe and his wife, Pat, were on their way back from Virginia where they had just purchased a new (to them) boat! Onset was on their way home and they wanted to stop and meet us for dinner.  We hadn't seen Joe and Pat since somewhere along the Loop!!  Glen and Jill and Bob and I went into town, found a great place for dinner, The Stone Bridge Restaurant.  Joe and Pat joined us at the restaurant and we had a great time catching up with who did what and learned the news of Joe and Pat's new boat.
Sadly the evening came to an end and even sadder was the fact that Bob and I had to say good-bye to Glen and Jill.  They would be heading north tomorrow and going through the Cape Cod Canal and on to points north.  Bob and I would be heading back toward Mystic.

Friday morning we bade a fond farewell to Glen and Jill and headed Erika Lin in the direction of Bristol, RI.

Our trip Friday was not one of Lynda's most favorite.  The winds were from the Southwest, no unusual as this is the predominant wind direction.  However, the waves were on our nose, 2-4 feet, very steep and extremely close together.  This made for a very rocky and extremely uncomfortable ride.  Once we got to the Sakonnet River, just east of Newport, we headed up the river and the ride was much smoother as the waves were now on our port quarter.

Along the way, we saw this very strange boat.  After some research we learned the following:
MS Tûranor PlanetSolar, known under the project name PlanetSolar, is the largest  solar-           powered boat in the world.  The vessel was designed by LOMOcean Design, built by Knierim Yachtbau in Kiel, Germany, and launched on March 31, 2010.  In May 2012, it became the first ever solar electric vehicle to circumnavigate the globe. 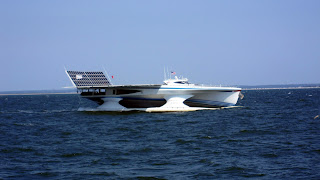 When we reached our destination, we went ashore and visited the Herreshoff Marine Museum.  Rhode Island's oldest boat, SPRITE, (claimed to be the oldest existing private yacht in the US), and RELIANCE, the largest America's Cup boat ever built, were Herreshoff designs. The first United States Navy torpedo boats, the finest light weight steam machinery, pioneering fin-keel spade-rudder boats in the 1890s, innovations in boat/yacht fittings, mammoth schooner yachts and the principal one design racers of the New York Yacht Club were designed and built by the Herreshoffs. Their most legendary accomplishment was the construction of eight consecutive successful defenders of the America's Cup from 1893 to 1934.

Besides the yachts and models, the Museum has catalogued and displayed hundreds of artifacts and memorabilia significant to the Herreshoff legacy. This impressive collection includes ENTERPRISE's bronze stemhead, RESOLUTE's capstan, a quadruple displacement five cylinder steam engine from J.P. Morgan's yacht NAVETTE.  Photographs, correspondence, silver and china, tools and even Captain Nat's notes and spectacles are on display.

Today, Saturday, we traveled across Narragansett Bay and stopped at Brewers Wickford Cove Marina.  Before we did anything, we needed to wash the salt off the boat.  When we were done, I think the boat was 10 pounds lighter!  Bob and I walked into town, had a light lunch and headed back to the boat where we sat and relaxed on the back of the boat, each reading a good book.  Tomorrow we will head home to Brewers Yacht Yard in Mystic, CT.  Remember, if you are going to be in the area, we would love to have you stop by and say hello.  We are in slip B21.

PROBLEMS CAUSE A CHANGE OF PLANS


When we returned to the boat from Florida, we had plans to travel for a month, beginning May 28th, up the Hudson River to Lake Champlain over the Canadian Border and then back to Connecticut.  As we all know, in boating you must be flexible and plans can and do change.

First, we had an issue with our dinghy.  Last year before going to Florida we received new tubes for our Walker Bay dinghy.  They had been replaced under warranty because the PVC was defective and had deteriorated.  Because we were moving to Florida in the fall, we didn't have the time to bring the dinghy hull to the repair shop for them to install the new tubes, so Bob and I decided we would do it ourselves in the spring.  That little job took us almost a week and put us behind schedule.  Okay, not a major problem, we decided to leave on Saturday, June 1st instead of May 28th.

Saturday morning arrived, the boat was provisioned the water tanks filled and we were getting ready to leave at 10 am.  Bob goes in the engine room to open the through hull for the engine and it wouldn't move!  A number of years ago, shortly after we bought the boat, there was a recall on all the through hull valves.  We received the replacement valves, under warranty, but because the valves were working, Bob decided not to replace them at that time.  Well, now is the time they decided not to work, so now is the time to replace them.  We need to have the boat hauled, but first must drive back to our house in Middletown, CT and get them from the basement and we couldn't do that until Tuesday.  So, since we couldn't leave on Saturday as planned, we decided to take a ride up the Mystic River in the newly repaired dinghy.

About a mile up the river, the outboard engine died and would not start/run again.  Fortunately, our friends Jack and Carole on Irish Rover came by and towed us back to our dock! Bob tried and tried, along with help and advise from others on the dock, and the engine would not stay running.  So on Monday, the 3rd, we  brought the outboard to the repair shop.  They thought we might have it back by the weekend.

We made the trip by car to Middletown, got the replacement valve and on Wednesday, the 5th, the boat was hauled and the valve replaced within 1 1/2 hours.  Then as Bob was bringing Erika Lin back to her slip, he discovered the stern thruster wasn't working.  After investigating this problem, he found that the terminals on the battery for the thruster were corroded and needed to be cleaned.  Fortunately, that was a quick and easy fix!

Currently we are waiting on the return of the repaired outboard engine, and with Tropical Storm Andrea on her way, we have decided not to make the trip up the Hudson and Lake Champlain this year.  Too many things are telling us not to go!!!  Maybe next year.  For this year, we will probably cruise Narraganset Bay, maybe the Vineyard, Block Island and the Shelter Island area..

So, there you have it, our sad tale of woe!! But we are both healthy and enjoying our time on the boat and looking forward to cruising waters we have cruised for many years and visiting familiar places this summer.