Another beautiful sunrise, as we make plans to head out to our next destination. 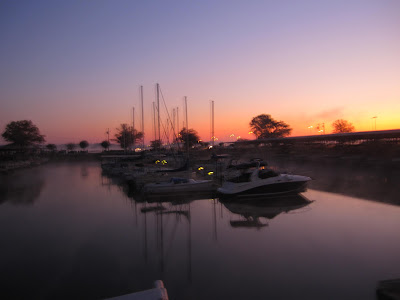 There is much industry along the Tennessee Rive in Decatur, AL.  We even discovered that this city is the home of Meow Mix, among other things! 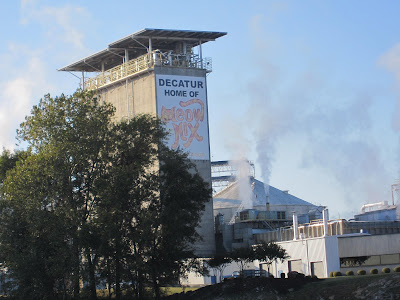 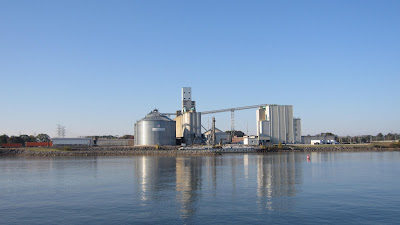 The scenery along the river is spectacular.  The normal sights, combined with the colors of the changing leaves, are absolutely beautiful. 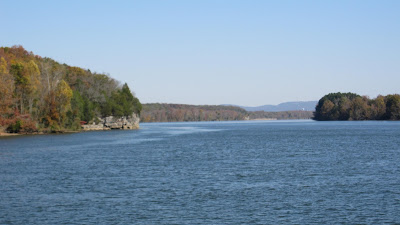 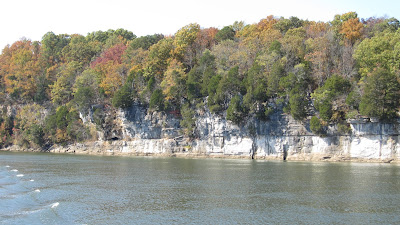 Ditto Landing Marina in Huntsville, AL is our stop for today.  We will stay here two nights as we hope to visit the Space and Rocket Center in Huntsville tomorrow.  It is the world's largest space museum and has the Nation's finest and largest collection of NASA rockets and army missiles, a 98 ton full size model of the Space Shuttle and the only full-scale model of the Hubble Space Telescope.  Below is a picture of the transient docks.  Not a lot of visitors today, I hope we meet SOME people along the way! 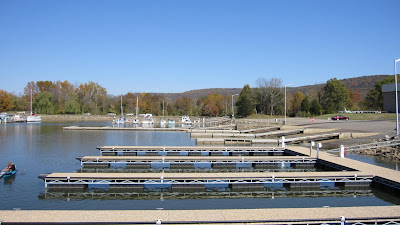 Up early to walk the dogs, and met fog again as we walked out the door. 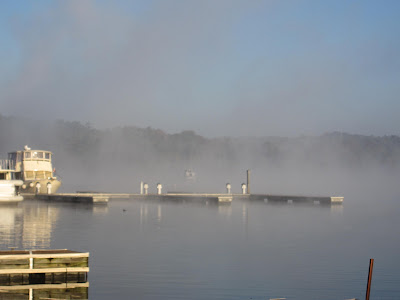 Not a big deal today as we didn't plan on leaving early since we were traveling a short distance..  We have seen groups of small black ducks that have a white spot on their beak and a white spot under their tail.  In researching in our bird book, we determined they were an American Coot.  Since they are a diving duck, we haven't been able to get a good picture until this morning! 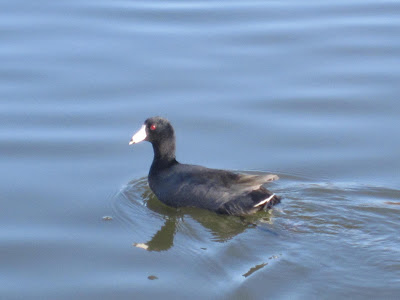 We were finally ready to leave and the fog had disappeared.  We bid a fond farewell to Joe Wheeler State Park.  We had a great time at this year's rendezvous.  From the picture below, you can see that most of the 59 boats that were in attendance had already left by the time we cast off! 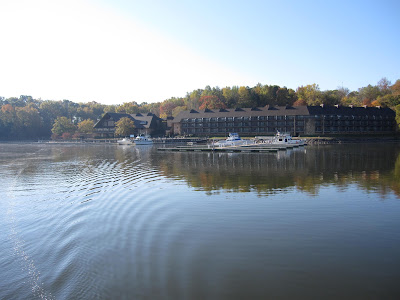 Today we would begin another side trip and head up the Tennessee River toward Chattanooga.  Not sure if we will go all the way to Chattanooga, it is approximately 185 miles one way.  We may just go as far as Huntsville or Scottsboro.  That's the best part of this trip, no place we have to be at any particular time!  Just before our destination for today, we caught up with Ookpik and Salty Paws, two other Looper boats.  They continued on farther up the river, we pulled into Riverwalk Marina. 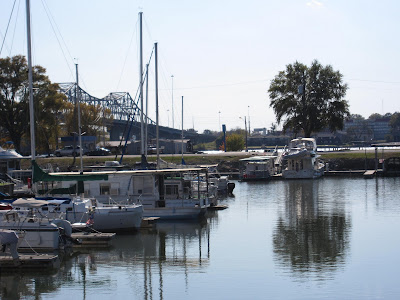 There is a small restaurant at the marina, the Hard Dock Cafe.  We had an early dinner and discovered they were celebrating Halloween with a costume party.  The staff was dressed in costumes.  We were served by Morticia Adams and a pirate (argghh) stopped by!  A band is also scheduled to play at 8:30 tonight; hope they aren't too loud. 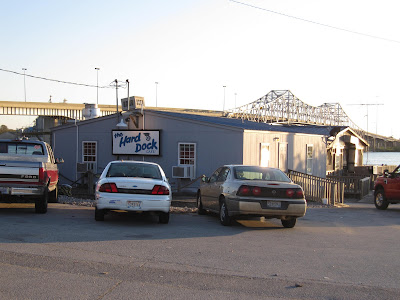 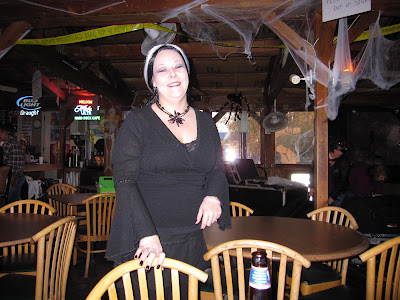 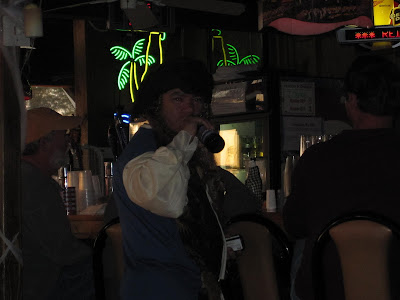 We left the restaurant just in time to catch this great sunset over the city of Decatur, AL (can you see the moon sliver on the right?). 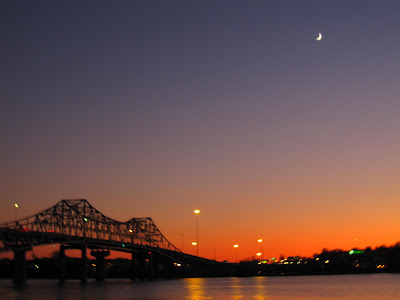 The Rendezvous ended yesterday (Thursday).  We had decided to stay and leave on today, Friday. However, when we got up, it was rainy, cold and windy and we decided to stay another day!  So here we are, cozy and warm inside our on-the-water home.  With the extra days at the marina, Lynda was able to get the laundry done and banking information updated.  We will have dinner at the Wheeler Lodge tonight and plan on leaving Joe Wheeler in the morning (Saturday).  The Rendezvous was terrific with 59 boats and over 200 people in attendance.  We participated in a dinghy race.  Bob had to drive the dinghy in reverse and Lynda had to give him directions, oh, did I forget to mention that Bob was also blindfolded!  What fun!  He started out OK, but then we started to do circles and it was quite a job to get the dinghy straightened out.  They tell me not only did I give verbal directions, but I was also pointing the way to go; don't think that helped with Bob being blindfolded and all.  Out of five participants, we came in third.  A good time was had by all at this year's gathering.  "See you in the spring at Norfolk" could be heard as the rendezvous came to a close.
On Thursday, a large group of approximately 14 boats left, all together.  They left in a group so that they all could get through the first lock at the same time.  Boats then continued to leave throughout the morning, until only about 12 boats remained and stayed the night.