The morning started out gray and rainy, with light winds and seas of 1 foot or less.  As the morning progressed, the rain stopped but the skies remained overcast. We saw  a good number of cargo ships on the Chesapeake Bay today.  Below is an example of how very large they are! 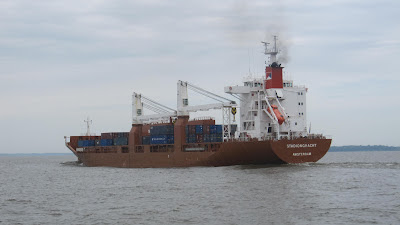 Throughout our travels on this trip, we have see an enormous amount of great blue herons and ospreys.  The herons have always been found alongside the rivers and the ospreys are usually found nesting on the top of the channel markers.  This is a first, a heron on the channel marker!! 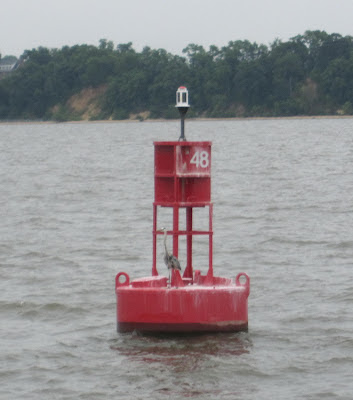 After docking the boat and checking in at the Town Hall, we walked over to the C and D Canal Museum.  The C and D Canal Museum, which is adjacent to Chesapeake City, is housed in the old canal pump house and is open to the public, free of charge. The museum contains exhibits and canal artifacts. One of its main features is the oldest canal engine of its kind in the United States, still on its original mount.

May 28th-Memorial Day.  Another great day to travel on the Chesapeake.  Light winds, 1 foot seas.
As we proceed up the Patapsco River, we pass by Fort McHenry.  Fort McHenry is a star-shaped fort best known for its role in the war of 1812, when it successfully defended Baltimore Harbor from an attack by the British Navy in Chesapeake Bay.  It was during the bombardment of the fort that Francis Scott Key was inspired to write "The Star-Spangled Banner".
After we reached our destination, we went off for a visit to Fort McHenry.  It was extremely warm and humid, almost 100 degrees, but the breeze coming off the river into the fort brought some relief.   We toured the Visitor Center and watched a brief video then headed on up the hill to the fort.  We arrived at the fort just in time to view a flag changing ceremony and Lynda participated in helping to raise the new flag. 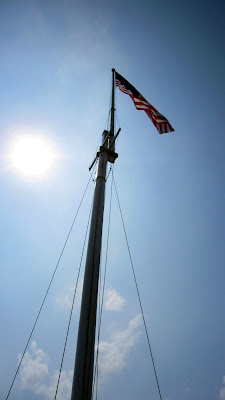 A painting of the star-shaped Fort McHenry, as it appeared in 1814. 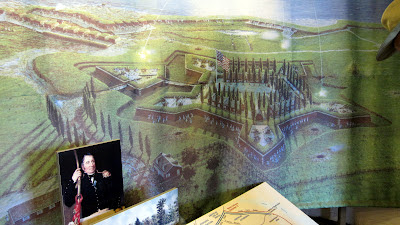 Sights around the inner harbor of Baltimore 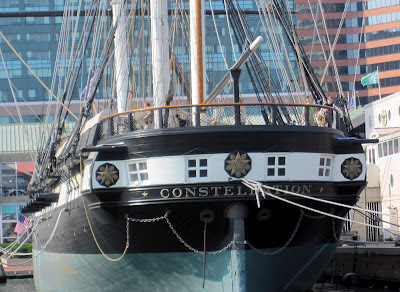 May 29th - Today's weather is more of the same, hot, humid and sticky.  We decided to spend the day inside the National Aquarium in Baltimore where it was much cooler!
An assortment of jellies 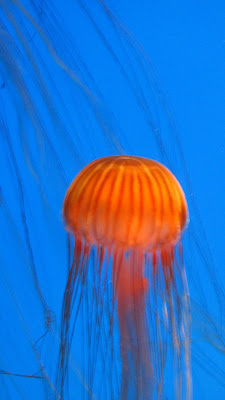 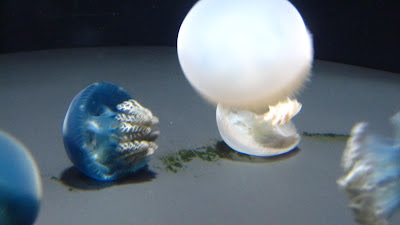 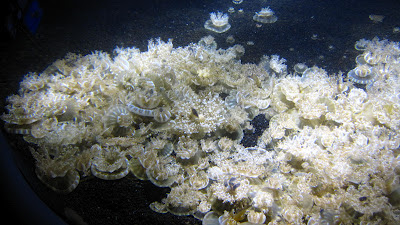 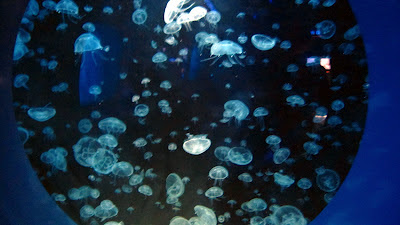 Before we left Spring Cove Marina, we needed to get to a CVS pharmacy to fill a prescription for Bob.  Fortunately, there was a CVS only about a mile away, so we took the marina bicycles and headed off at 7:45 am.  We arrived at CVS as they were opening, they filled the prescription in record time and we were headed back to the boat within 10 minutes.  By 8:45 am we had cast off our lines and were pulling away from the dock, headed for Annapolis, MD.  We had another delightful day on Chesapeake Bay.  Clear blue skies, light winds  from the south and waves that were no more than 1 foot.  We encountered a few more boats on the water than we have in recent days, due to the unofficial start of the long Memorial Day weekend.  One of the things I had wanted to see on this trip was the Thomas Point Lighthouse.  It is a "screwpile" type lighthouse and we have a painting of it in our home in Connecticut.  I wasn't disappointed!
Marc's Ark and Jim's Joy had left Solomons about two hours before us.  They were already docked in Annapolis and waiting for us to arrive .  Shortly after we arrived in Annapolis on Thursday, we made the short walk to the urgent care clinic to have Bob's elbow rechecked.  We explained why we were there, the doctor looked at the elbow, said it looked like the antibiotics were working, but wanted to see him again on Saturday.  Fortunately, it is close by to the boat and we can walk there in about 5 minutes.  On Friday we decided to take a trolley tour with Marc's Ark and Jim's Joy.  We find these tours fun, relaxing and informative.  Saturday, Marc's Ark and Jim's Joy left for Baltimore, but Brown-Eyed Girl (Ginny and Craig) arrived.  We decided to tour the US Naval Academy, but first a trip back to the doctor.  Bob was very happy to hear that the doctor would not have to drain his elbow again and that the swelling had gone down.  The doctor did advise him, however, to have it rechecked again in a few days.  Now off to the Academy.  We signed up for a guided walking tour and learned about some of the history and what the buildings were.  This year, they have a record 22,000 nominations for attendance, however, they will only accept 1,100 appointments. Then on Sunday, we went to the Annapolis Maritime Museum which is housed in the last remaining oyster packing plant in the area, the McNasby Oyster Company building.  Following are pictures of the sights in and around downtown Annapolis. 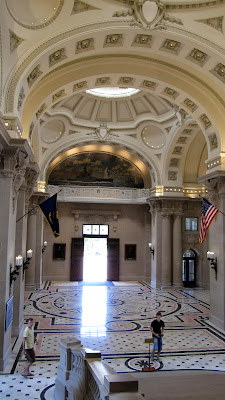 An Unexected Side Trip in Solomons, MD

Date           May 23, 2012
Day            330
Departure   No travel today
Arrival        Spring Cove Marina, Solomons, MD
Miles                  0.0
Cumulative   5338.8
We rode the marina bicycles to the near-by Calvert Marine Museum.  They have amazing displays of twenty-million-year-old-fossils taken from Calvert Cliffs, just a short distance from where we are staying.  They also had a section on local wooden boat-building, oystering, a marsh exhibit, Bubbles and Squeak the otters and the restored Drum Point Lighthouse.  The lighthouse was moved from it's original location at Drum Point to the Calvert Marine Museum.  It has been completely restored and is open for tours. 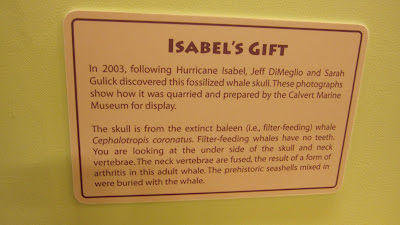 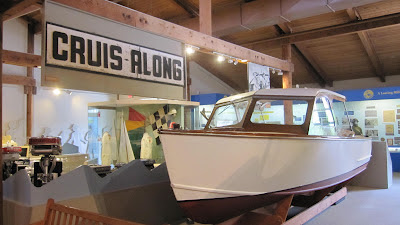 Look at that, this pirate must have captured the sister of the mermaid we saw last week!! 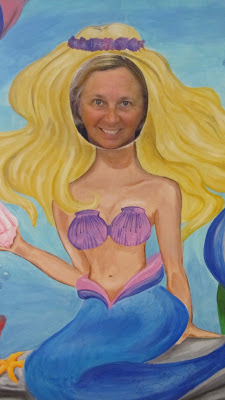 Well, we had quite an unexpected side adventure later in the day.  Some time last week, Bob had bumped and scraped his elbow in the engine room of the boat.  It seems it became infected, because his elbow was sore to touch, red, swollen and very warm.  We went to the urgent care clinic located near the marina.  The doctor said he needed to get to the emergency room at the hospital and have it drained as there was an infection in the bursa.  The hospital was 20 miles away, we didn't have a car and the marina was closed!  Lynda called the emergency number posted at the marina, reached the marina owner and he let us take the marina pickup truck.  We spent four hours in the hospital, Bob was given an IV, they did some blood tests, an x-ray, his elbow was poked with a four-inch needle and the doctor removed 5 cc's of fluid from his elbow!
They gave him an IV of antibiotics, some pain pills, a prescription for more antibiotics to get in the morning and instructions to follow- up with the urgent care facility in Annapolis (where we will be heading tomorrow).  We finally arrived back to the boat at 1:15 am!!  Whew, what a night.
Thankfully, it appears he will make a full recovery and we won't need to delay our travels.
Lynda Bob & Lynda at 11:04 AM 2 comments: