Wednesday, September 1st - Cast off from the Herreshoff dock at 10:30 am, traveled past Newport and Point Judith, RI.  The seas were a little lumpy with a swell that would rock us side to side.  Once we rounded Point Judith, the seas smoothed out and we enjoyed our lunch that we had purchased in Bristol.  We are now in familiar waters as we head through Watch Hill Pass, past Stonington and on up the Mystic River.  We arrived  at our home port around 4 pm after a pleasant, uneventful sail.

Thursday, September 2nd - Hurricane Earl is supposed to arrive in the area tomorrow night.  Boat owners have begun to arrive and tie extra lines on their boats.  The marina has begun to make preparations for his arrival.  They have hauled a boat or two, removed and stored the dock carts and umbrellas that are usually on the picnic tables throughout the yard.  We will be staying on board for the duration of the storm unless it gets to rough and unsafe.

Friday, September 3rd - The day started sunny and little wind, but as time went by, clouds began to form and the wind picked up a little bit.  Hurricane Earl is scheduled to arrive around 7 pm as a category 2 hurricane.  We sat on board all day, read and watched the Weather Channel for updates on his progress.  Bob and I took a dinghy ride up the Mystic River.  We had seen a number of very large boats go up the river during the day to take refuge from the storm and we wanted to see where they were.  There were three large (over 120 feet) yachts that had been tucked into slips at Mystic Seaport Marine.  One of them, Bayou, even had an amphibious car on the upper deck!  We decided to have an early dinner, so Bob went picked up a pizza at Angie's.  Once the pizza was finished, again, we sat and waited, still not much happening.  We briefly lost TV satellite reception, so I decided to go read some more in bed.  I was waiting all night for the wind to start to howl and the waves to begin slapping on the boat, but nothing materialized.  We may have wind gusts of only 15 mph. 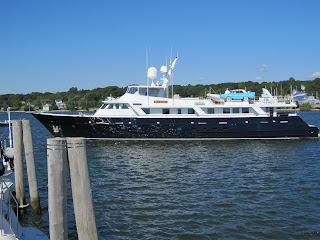 Saturday, September 4th - woke up this morning to find a much cooler day and that Hurricane Earl had been downgraded to a category 1 hurricane and  had passed the Mystic area with not ill effect!  Today, a front from the west had arrived, which brought the much cooler, less humid weather, but strong winds.  One of the folks on a sailboat here at the marina clocked wind gusts at 42 mph!  The wind today was much stronger than during the hurricane.  Here is a picture of the swells that rolled through the marina 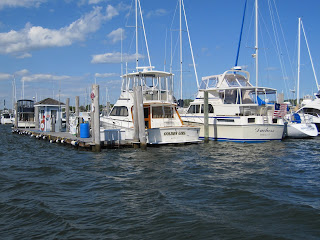 Saturday, the 28th, we are still at Brewer’s Fiddlers Cove in North Falmouth, RI.  It was a good day to do some laundry, so Lynda gathered up the towels and clothes and went off to do the wash.  The marina has one washer and two dryers, so while the wash was being done, Lynda sat, relaxed and did some reading in the marina clubhouse.  Before long, the clothes were washed, dried, folded and brought back to the boat.  In the afternoon, we (Bob, Lynda, Willow and Tucker) went for a dinghy ride to explore Fiddler’s Cove.  We traveled up a narrow inlet, and were surprised to find the inlet lined with beautiful privately owned homes, each with their own dock and boat tied up to it.  Later, for dinner, we enjoyed swiss steak for dinner that had been cooking all day in the crockpot.  Tomorrow we will travel a short distance up Buzzards Bay to Red Brook Harbor and stay at Kingman Yacht Center in Cataumet, MA. 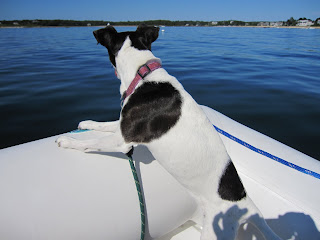 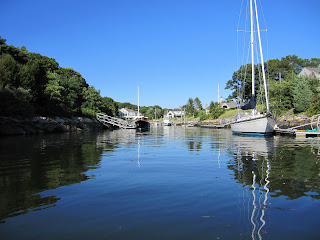 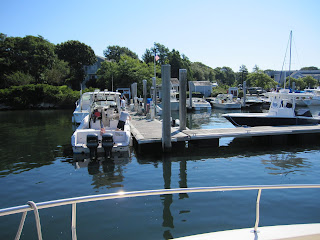 Sunday, August 29th, we left Fiddlers Cove around 10:30 am and headed up Buzzards Bay.  There was a small swell on the Bay, but other than that, it was a pleasant, short trip to Kingman Yacht Center.  Along the way, we noticed a large plane that had just taken off from a nearby airport.  Bob said it was one of the presidential planes, if not Airforce One.  President Obama had been vacationing on Martha’s Vineyard and we figured the plan was on its way back to Washington.  Kingman Yacht Center is a fairly large, well protected marina.  Our slip was tucked around back and was very quiet.  Just a short distance from our boat is a popular local restaurant, The Chart Room.  The Chart Room is a former covered barge that was built around or before 1900.  The ceiling is still the original curved beams and the floor is made of old railroad timbers.  We noticed a sign on the wall that marked the high water line of Hurricane Bob from 1991.  The restaurant is approximately 15 feet above sea level, and the mark on the wall was about waist high!  We watched another beautiful sunset and tomorrow it’s off to Hadley Harbor on Naushon Island.  From Hadley Harbor we will head to Cuttyhunk Island.  We won’t have any internet access until we leave Cuttyhunk, so I won’t be able to post any updates until we have access. 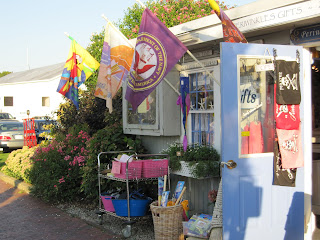 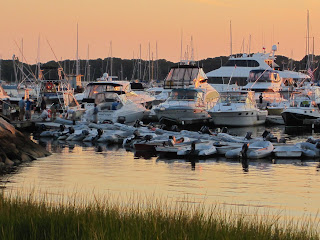 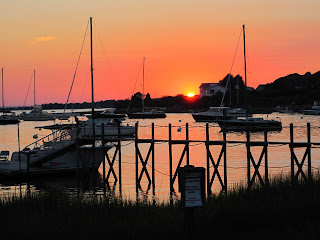 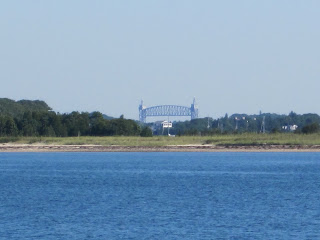 Monday, August 30th, traveled to Hadley Harbor. We hadn't been here in about 20 years. We were surprised to find a number of moorings in the harbor. Some were marked private, others were not. Other folks in the harbor indicated that if the mooring was not marked private, it was available to use. We located an empty, non-private mooring and settled in for a quiet, peaceful afternoon. Since it is after the weekend, the harbor was quiet. During a weekend, the harbor can become extremely crowded with anchored boats as it is a very popular spot. The mooring we were attached to was right behind a boat with an AGLCA looper burgee. The boat was Potest Fieri, a Nordic Tug from Ontario. We chatted with Dan & Susan for some time and they gave us a lot of helpful info for our upcoming trip next year. Tomorrow we will head to Bristol, RI to the docks at the Herreshof Maritime Musuem. 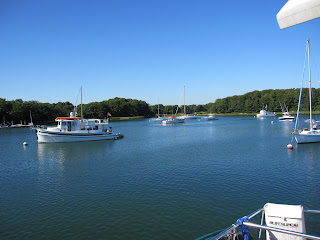 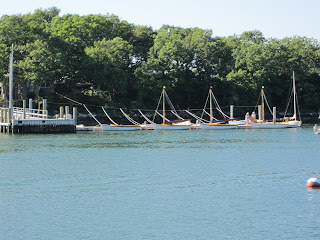 Tuesday, August 31st we said goodbye to Potest Fieri, wished them a safe journey and left Hadley Harbor around 10:30 am. We headed west on Rhode Island Sound, traveled up the Sakonnet River and arrived at the Herreshof Museum around 3:30 pm. They were closed today, but we had previously received a dock assignment. Bob and I got the boat docked safely, washed the salt off and took the rest of the afternoon off! Later on, we walked into town and had a nice Italian dinner at Roberto's restaurant. After dinner, we walked a little further into town and picked up a grinder for lunch tomorrow. Because of the impending arrival of Hurricane Earl later this week on Friday, our reservations at Brewers Wickford Marina were cancelled. We decided to head back to Mystic on Wednesday, rather than try to find another place to stay on Wednesday and then try to hurry home on Thursday. The trip from Bristol to Mystic will be just a bit longer than we like to travel, so we thought we would be prepared with a pre-made grinder for lunch! 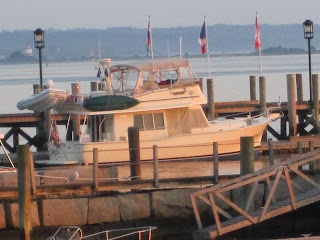 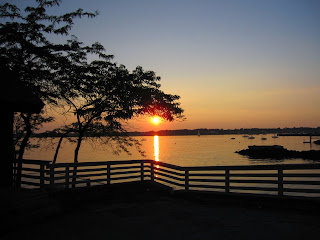