The day was sunny and warm, but we decided to stay put as the lake was reported to be lumpy and winds were forecasted to be 15-20 knots. Bob and I took a bike ride on the nearby bike trail.  Right across the river is the town of Montague, and they were having a farmer's market today.  We met Jill and Glen from Last Dance at the farmer's market and after making a few purchases of corn, green beans and a cherry pie, the four of us stopped for lunch at an old drug store.  In Montague is the world's largest weather vane.  This functioning weather vane is 48 feet tall with an arrow 26 feet long. Very unique and interesting! 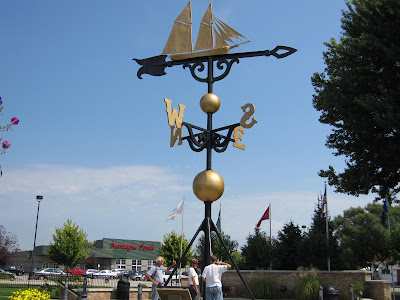 Along the bike trail is another unique sculpture.  The steel sculpture is 22 feet tall and feature the designs of sailboat masts on one side and trees on the other.

When we returned to the boat, we said good-bye to Jill and Glen.  They were heading down the lake and then on to Muskegon tomorrow.  We plan to go a bit farther, on to Grand Haven.  We have plans to meet up with our long-time friends, Paul and Kathy Reidel who live in Michigan.  They have an RV and will be staying in the Grand Haven area for the Labor Day holiday.  Hopefully, we can all get together!  I will say good-night with my usual sunset picture! 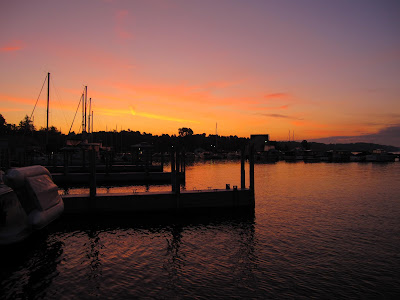 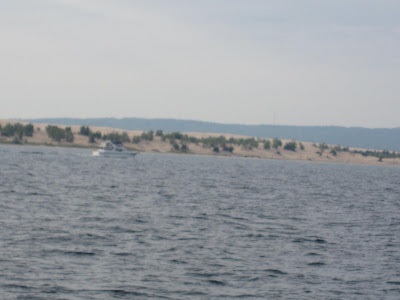 The dunes along the eastern shore of Lake Michigan are amazing.  I never would have thought there would be dunes in Michigan!

Today's stop is another small Michigan town.  Most of the towns we have stopped in have a single street on which the main businesses are located.  White Lake is no different.  The marina is located at the end of White Lake, which is 5 miles long.  There is a bicycle path on an old railroad line that crosses its own bridge to Montague on the north side of the river.  There it joins the 24 mile long Hart-Montague bike trail.  While in White Lake, we were able to install a small table on which we can place the netbook computer.  The netbook has chart software installed and is connected to the AIS output from the VHF radio.  We will be able to monitor where tows and barges are located, along with their name and how far they are from our boat.  This information will be invaluable to us once we get to the river systems below Chicago.  Here are a few pictures of the marina.


It must be the end of the season.  There were only four boats in the marina and three of these were loopers!! 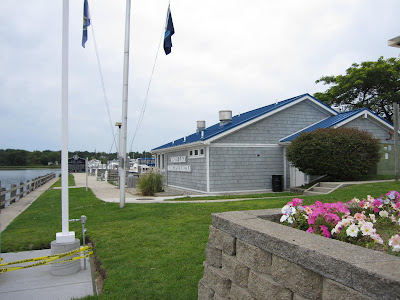 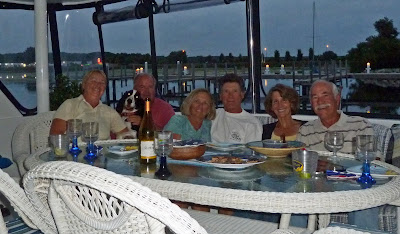 We were invited aboard Superior Lady for cocktails.  Above is Nancy, Oliver and Rick from Superior Lady, Bob and Lynda from Erika Lin and Jill and Glen from Last Dance.
We are keeping an eye on the weather, as it doesn't sound favorable for travel tomorrow.  If not, we will remain here in White Lake and enjoy the day of rest!

I couldn't resist taking this shot of the entrance to the channel in Pentwater.  Not often do we find such smooth, calm waters! 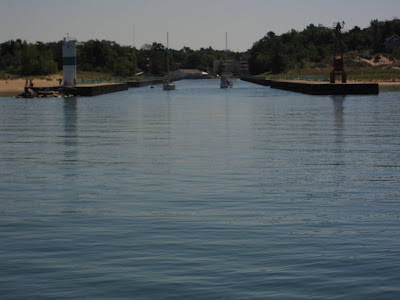 After, we arrived, we took the dogs for a walk through the town.  We found a farmers market and purchased some farm fresh blueberries.  We met up with Last Dance.  We joined Jill and Glen from Last Dance for a bike ride to the beach and a stop at their boat for a happy hour.  Then back to our boat for dinner and off to bed.  What a tiring day!


Today's voyage was much more comfortable than yesterday, however, boats that came in later in the day said the waves had built during the day once again!  Lake Michigan is certainly not like boating on Long Island Sound.  At least on the Sound, you can predict what the weather will be for the duration of the day!
Manistee began as a lumber town around 1840.  By 1885 there were more than 40 sawmills operating in the area.  In the mid 1870's there were may lumber barons that had become millionaires.   By 1896, Manistee was one of the richest cities in the US per capita.  Today it is a beautiful and quaint Victorian town.  The marina is located on the Manistee River.  The town has created a beautiful riverfront that includes the "Manistee Riverwalk", a boardwalk that goes from the beach all the way to Lake Manistee.

The forecast was for north winds 15-20 mph, with waves of 2-4 feet.  We left earlier than usual to try and beat the larger waves.  The first 1/4 of the trip was really rocky as the waves were hitting us on the starboard beam.  Once we made a course change to a more southerly direction, we had following seas which is a little more difficult to steer through, but more comfortable.  Along the way, we passed Sleeping Bear Dunes National Lakeshore.  Recently, Good Morning America named Sleeping Bear Dunes National Lakeshore as the most beautiful place in America.  Unfortunately, the waves were not cooperative, so we were not able to get close enough to get good pictures.  Here is what I was able to capture,
We finally were able to make it to our destination, Frankfort Municipal Marina, safe and sound!  There was quite a lot of activity at the marina, as they were having a fishing tournament.  The participants were fishing for salmon and one of the fish I saw was over 25 pounds.  Frankfort Municipal Marina is right downtown, like most of the Michigan Marinas we have stayed at.  Everything you may need is just a short walk away.  There is a beautiful beach a short walk down the street and there was a wedding party having pictures taken on the beach.  Here is a shot of the beautiful beach
and a lovely park that was located between the waterfront and the main street 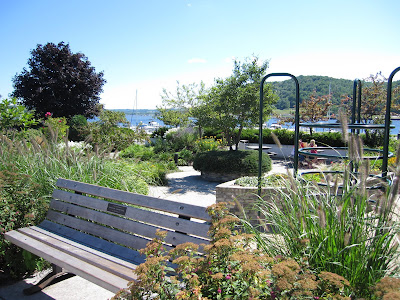 And here is Erika Lin in her slip, between Spirit Dancer on the left and Moon Glow, on the right.  Both boats are Loopers, but Moon Glow will begin in approximately three weeks. 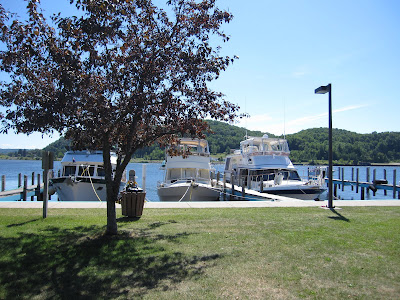 Day                59
Departure    Charlevoix Municipal Marina, MI  7:15 am
Arrival          Leland Municipal Marina, MI  11:30 am
Miles                34.3
Cumulative   1271.0
NOTE: For a larger view of each picture, click on the picture, then click again for an even larger view!
Finally, a break in the weather.  We left at 7:15 am to fair skies, winds of 10 knots and waves of 1 foot.  We arrived in Leland before noon.  Last Dance and The Cooper arrived just before we did and as the day progressed, Spirit Dancer, Muddy Waters, Adagio and NautiNell also arrived (all Loopers!).  The harbor was extensively renovated in 2009 and there were many slips available for us.  Commercial fishing boats use the river just inside the harbor to proceed a short distance upstream to Fishtown to unload.  Fishtown is a picturesque area with old fish shacks on both sides of the Leland River.  The town of Leland is just a couple of blocks away.  If the weather holds, we will move on tomorrow.

Although the day is sunny with blue skies, the pictures below will explain why we are still here! 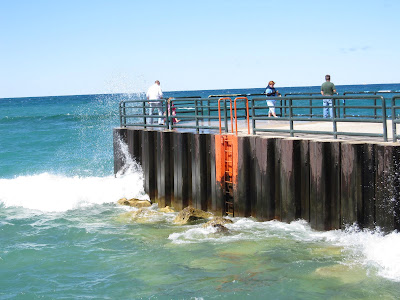 We took advantage of the time in Charlevoix and went walking to see some of the sights.  The "Mushroom Houses" are a must see.  These homes were designed and built by Elliot Young, a local of Charlevoix.
Young, at 5-feet-4, loved the cozy cottages in the rural areas of Great Britain. From the 1920s-1970s, he transferred these images to Charlevoix and built, without plans, many homes and several commercial buildings, including the Weathervane Terrace Hotel. The Ice Age boulders of the Great Lakes region were his favorite building material. They became his signature, along with the wavy, overhanging shingled roofs he used. These give the smaller homes a mushroom-like shape. 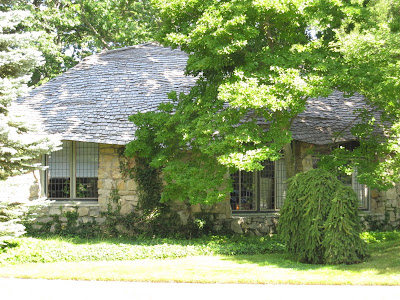 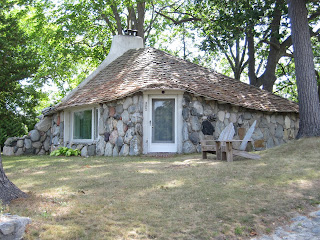 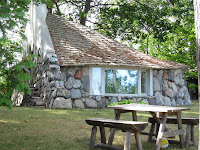 This is the smallest mushroom house in Charlevoix.  On the left is a front view and a side view on the right.

This particular house had an interesting chimney "icing". 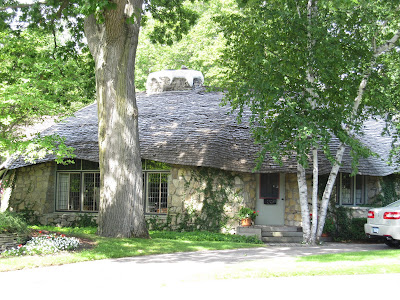 We discovered a store that has everything cherry, the Cherry Republic.  Bob's favorite was dark chocolate covered cherries, but not the kind with a liquid center.  These are whole cherries covered in dark chocolate!  My favorite was cherry malted milk balls.  They were soft, not hard like the traditional malted milk balls!  They even had cherry treats for dogs.  Tucker and Willow got to try a sample! 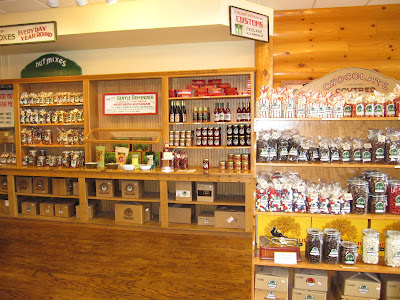 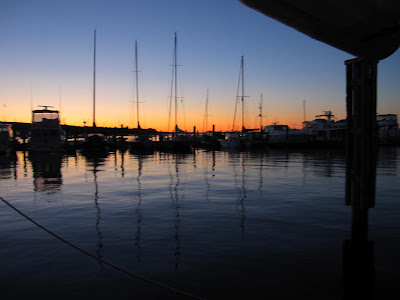 however, as luck would have it, it had started to sprinkle when were left the dock.  We started driving from the fly bridge, but the rain became more than a sprinkle and we went below to drive from inside.


The waves on Lake Michigan were only about 2 feet so the ride to Charlevoix was fairly comfortable.  To get to the marina, you have to travel up Pine River which is a narrow channel.  At the end of the channel is a lift bridge that opens only on the hour and the 1/2 hour. 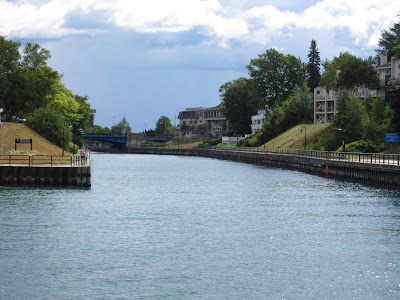 We had to wait in the bay for a 130 foot pleasure boat to clear the channel, and then we had to wait for the next bridge opening.  Fortunately, the river was flat calm and there was no wind.  Finally, the time has come for us to go through the bridge. 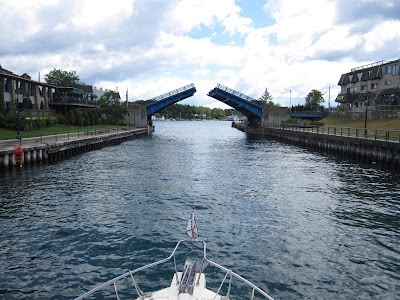 The marina is just ahead on the right.  It is located within 100 yards of downtown Charlevoix and everything is just a short walk away!
The weather reports for Lake Michigan don't look too favorable for the next few days.  We may have to stay here in Charlevoix.  Not a bad place to be holed up!  More pictures to follow tomorrow.

we noticed a storm was approaching to the north of us. 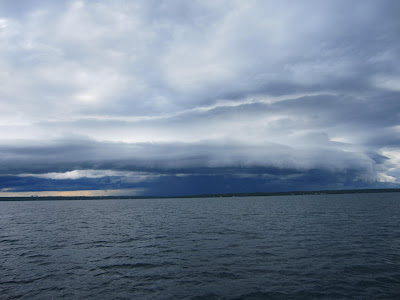 It got very dark over St. Ignace (where we had left from earlier) and then the thunder boomers came.  We watched the storm on radar and visually.  It stayed to the north of us, then went east of us and then south of us.  We heard a weather alert on the VHF radio issued by the Coast Guard, of a severe storm with gale winds and 1/2 inch hail.  We were very thankful that the storm circled us and did not affect us in any way!  Bob enjoys watching the ships.  So much so that he purchased a book to be able to identify who they are, how big they are, where they are registered and what type of vessel it is, ie self-unloader, bulk carrier or tanker.  The photo below is of the Federal Patroller.  It is 469 feet long, almost 75 feet wide and is a bulk carrier.  This ship is one of the smaller ones, we had seen one earlier that was 1004 feet long!
As we neared our destination, another storm appeared.  We had hoped to beat it to the dock, but that was not the case.  The rain came down in buckets just as we approached the dock.  We were prepared with our rain gear on, but the wind was blowing so hard and the rain poured down both Bob and I were drenched from mid thigh down!  As luck would have it, as soon as the marina staff finished tying the lines on the dock, the rain stopped and the sun reappeared!  Well, at least everything on the bridge had a chance to dry out!  After a busy weather day, here is tonight's sunset.