Recently Bob and I were walking down our dock and noticed a huge swarm of insects above our heads.  We couldn't tell what they were, but we were able to pass under the swarm and they didn't seem to mind that we were there.  A short while later, we returned to the top of the dock and found this.... 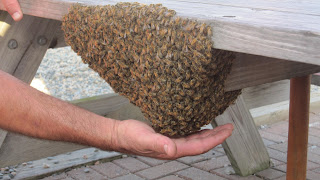 A huge swarm of honey bees!!  The yard manager claimed they wouldn't bother you if you didn't bother them and placed his hand just under the swarm.  He was braver than I would ever be!!  He contacted a local beekeeper who arrived the next morning and removed the bees. 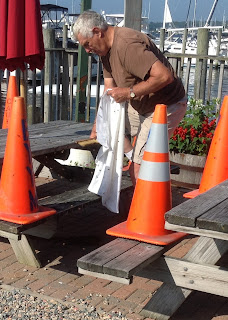 He didn't were a protective suit, simply used a small brush and pillow case and swept the bees from the table into the bag.  Fortunately he was only stung once!  After he left, there were a few stragglers, but they were gone within a couple of hours.

This past weekend, we attended our first MTOA (Marine Trawler Owners Association) Northeast Rendezvous , held at the Mystic Seaport. 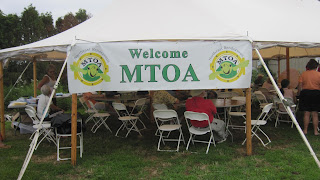 A number of helpful, informational seminars were provided.  One on the proper way to use a fire extinguisher and put out a fire.  A fire extinguisher was connected to a video screen that displayed flames of a fire.  Just as in an actual situation, you only had sixteen seconds to put out the fire before the extinguisher ran out!!  It was more difficult than you think! 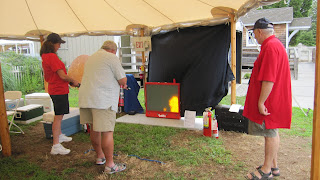 Another seminar was how to light a flare and then hold the lit, glowing flare.  This was extremely helpful, since it is unlawful to set off flares unless there is emergency.  We hope we never have to use them, but now know the proper procedure.


The 93-foot wooden Honey Fitz served five presidents and is most widely known as the boat used by John F. Kennedy. Dubbed “The Yacht of Camelot,” Honey Fitz hosted first-family vacations and was a mobile office for high-level meetings. After falling victim to neglect, Honey Fitz recently received a two-year refit, bringing her back to presidential standards. The current owner is looking to reintroduce the country to this historic vessel through Honey Fitz Yacht Charters, which is organizing a summer goodwill cruise up the East Coast to raise money for an array of charities. Honey Fitz will host fundraising cruises from her Palm Beach, Florida, home port to her old New England stomping grounds of Newport and Nantucket.  We were graced with this beautiful yacht outside our back door tonight. 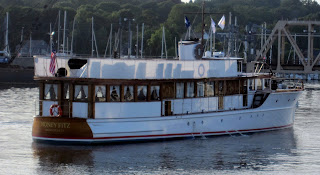 And here is tonight's beautiful sunset as seen from our back door. 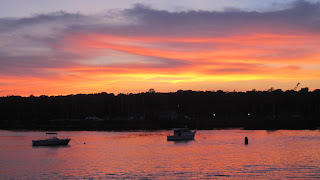